Facebook is the leading platform for Pay per Click (PPC) ads. The precision of targeting audience in Facebook is unmatched by any other platform in the history of marketing. Optimizing ads to get best returns has become easier with Facebook adding many new features for better returns on marketing spend.

However, the process itself has become complicated. There is a reason why pay per click advertising is now a profession within itself.

Terms such as lookalike audience, Ad relevancy, bidding options can be confusing to many. Fast changes in Ad Manager and Facebook algorithm do not make things any simpler.

In this blog we will look at a checklist to optimize your Facebook Ad campaigns for maximum reach and higher conversions.

Ad frequency is the average number of times each user see your ad. Too little exposure or too much exposure to your ad can hurt your campaign performance.

Too little exposure means that your message will not get through. On the other hand, too much ad exposure will lead to ad fatigue where the audience mentally blocks out your ad or even reports it irrelevant.

You can manage and monitor ad frequency from Facebook Ads manager > Edit Ad Set. To automatically limit reach, go to Optimization and Pricing to choose daily unique reach option which limits your reach to once a day per user. 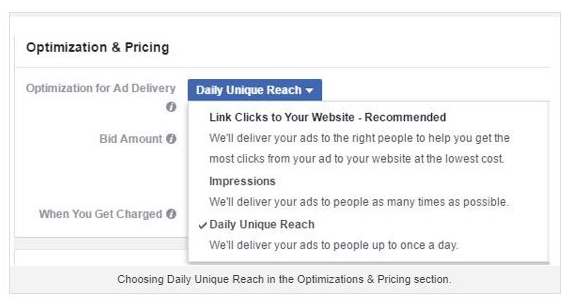 Facebook’s ability to target audience right down to the micro level makes it so appealing to marketers. No other platform gets more specific than Facebook when it comes to choosing your audience. You must use full targeting features available to get maximum out of your campaign.

You can select your audience based on nationality, region, gender, interests, age and language. You can also input your ideal audience and create a lookalike audience.

Selecting custom audience show your ad to selected groups such as current customers, visitors to your site, or custom list of people you input. This allows you to integrate Facebook right into your conversion funnel. For example, with custom audience you can show relevant ads to customers who abandoned your shopping cart page. 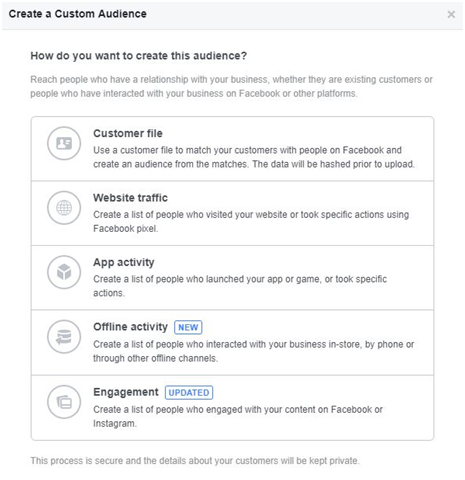 The success of your Facebook depends on many factors. Some of them are audience selected (age, country, interests, profession etc.), ad frequency, images, ad title, ad copy, call to action, color scheme. You can have many ads by varying each of these parameters. How do you know which ad copy will perform the best? The answer is simple – A/B testing.

A/B testing is a way to run different versions of same ad and measure which ad performs better. You may find out that a green colored call to action button performs better than blue. Or that a particular image results in increase in click-through rate.

Setting up A/B testing is easy. Go to your ad manager in Facebook and create different versions of the same ad. Do not change more than two parameters in the testing version as you will not know which change led to higher success.  You can test both the version :

1. You can hide one version and start another or,

2. You can create two separate ads sets under one ad campaign. The new split testing features allows you to compare the results of ad sets within campaign.

Ad relevancy is a score of your campaign performance on the scale of 1 to 10. The score calculates how well your ad is performing with the set target audience. It is calculated based on factors such as:

Many marketers suggest that a good ad relevancy score boosts your ad reach and lowers your costs. However, Facebook maintains that ad relevancy is just a measure of your performance and is not used in calculating ad reach or bidding price.

Whatever the case may be, ad relevancy is a good measure of your performance and should be optimized to maximize your ad success. Try the following to improve ad relevancy:

1. Narrow your target audience to make your messaging more focused

4. Use split testing to learn what works best with your audience

There are many ways to pay for your adverts in Facebook. Spends could be per click, conversion or impressions.

Facebook automatically recommends the best strategy and daily spend for optimum result as per chosen objective of your campaign. You can also manually control the bids and daily spends according to your budget.

Optimizing for bids is subject to your objectives and budget available. For starters, you can trust in Facebook’s automatic bidding to deliver best results. 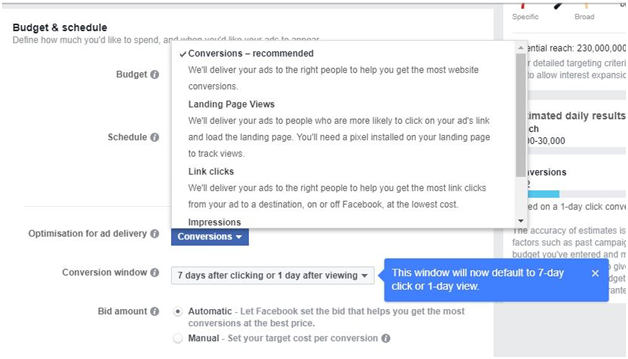 Let’s brief it up

Setting up Facebook ad campaign can seem daunting at first. However with so many options to fine-tune your ad it is well worth the effort. The important thing is to monitor and keep making changes to get maximum out of your ad spend.

Remember, what works today may not work next month. User behavior and Facebook algorithms are ever-changing. Continuous learning and optimization will give you most out of this most profitable advertising platform.