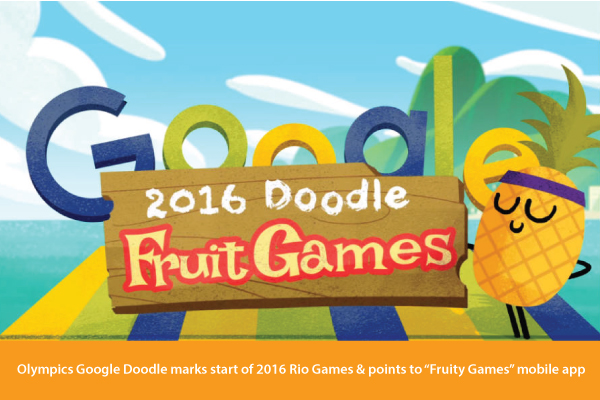 Google honored 2016 RIO Games with a video of animated fruits competing in various athletic events. In addition to this opening event, it is also an official launch of free “Fruity Games” mobile app which can be played on both Android and iOS.

“For the next couple of weeks, we’ll journey to an otherwise unassuming fruit stand in Rio, where produce from all over the market competes for the title of freshest fruit,” says the Doodle Blog regarding Google’s new Olympics-themed gaming app.

Google informed that users with the latest version of the Google app are able to download the “Fruity Games” mobile app by tapping the doodle.

Google’s Olympic video posted on its home pages increased the google search for “Olympics” all over the world. At the top results of “Olympics” google search leads to a display of Olympics Games RIO 2016 box.

Along with the video, users are able to get a list including details about games and athlets, overview of an event, schedule, and medal counts.

The Google Doodle blog invited readers to return tomorrow and following weeks to know about the latest updates of 2016 Doodle Fruit Games.