Facebook with its 2 Billion connection is undoubtedly the undisputed king of social media. Like any other social media website, Facebook’s main income is their Ad revenue. To yield maximum revenue they have successfully managed to plant advertisements in their news feed without causing any annoyance to their users.

Latest news is that Facebook has started placing advertisements on the home screen of Messenger app, creating mixed emotions among the public. 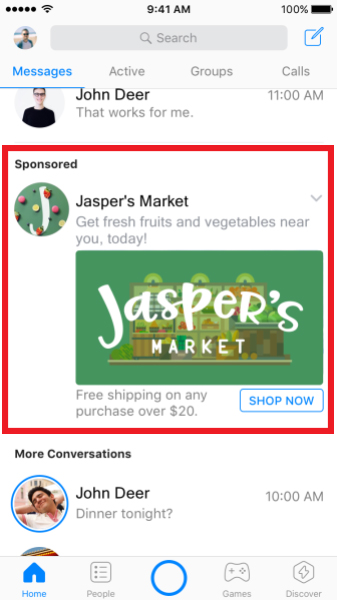 However, those who feel that the advertisement is being crammed up in between their messages can hide it by clicking the right bottom end of the Ad.

When asked about this, Facebook Messenger product head Stan Chudnovsky’s words as per media reports were like this,

“Advertising is not necessarily everything, but it’s definitely how we’re going to be making money right now. “

Talking about mixed reactions, some online portals were seen furious about the whole change. They are saying that Facebook and Google already channel 70% of the ad revenue from all over the world to their pocket. And this new implementation is nothing less than greed.

Rumor has it that Facebook expects a revenue decrease from news feed Ads and this insight is the driving force behind this new implementation.

To cover up the future loss and as an extra income, Facebook is expecting their Messenger Ads will earn them a jaw-dropping $US11 Billion by 2020. (According to Barclays Capital)

Facebook Messenger ad is not something which they have implemented in haste. They have already tested it in Thailand and Australia for 6 months and has the backing of promising results.

Instagram photo-sharing app owned by Facebook was the first one to try this method. They introduced advertisements slow and steady instead of implementing it once and for all.

Regarding the types of Ads, Facebook is planning to place two kinds of Ads in their messenger. Numero uno will be their normal advertisement similar to that of Facebook’s news feed Ad. After a while, they are planning to introduce chat bots as an effective interactive advertisement medium.

Advertisers can use these Ads in two ways: They can drive traffic to their website as well as they can answer queries of their customer via chat bots which might lead to a purchase.